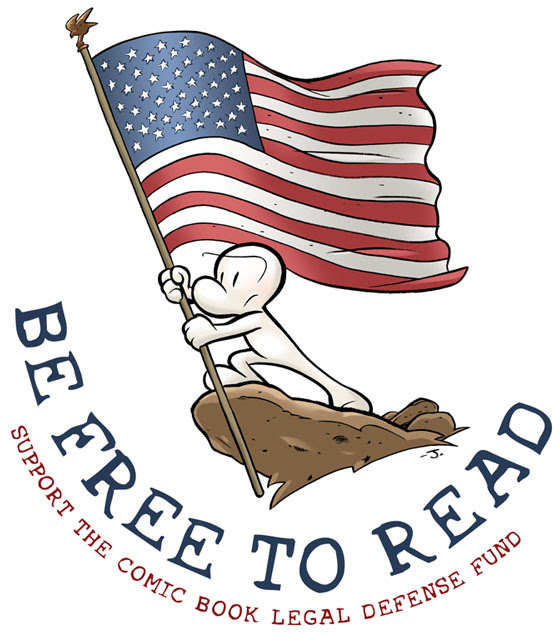 This post also appears on the Deep Stacks blog at Round Rock High School Library.

It’s not news that comic books, or at least stories and characters that were born in that medium, have become more and more visible over the past several years. Even if you’ve never darkened the door of your local comic book shop (which you should, even if — especially if — you don’t think you’d be interested), you’re doubtlessly at least somewhat familiar with the exploits of Scott Pilgrim, Groot, or Enid & Rebecca. But even with their renewed cultural currency, comics are not without their detractors. In recognition of this, the American Library Association's Banned Books Week 2014 is focusing on comic books and graphic novels which have have been challenged in our school and public libraries.

The Guardian published an interview on Friday with acclaimed comic book writer and artist Jeff Smith in which he discusses his views on challenges to library collections and his feelings about his best-known work, Bone, showing up on this year’s list of the most challenged titles:

“Comics are now part of the literary scene, part of the discussion, and it shines a spotlight on these kinds of attacks,” he said. “That doesn't mean the people who want to ban these books are malicious; in fact just the opposite. They have a concern which to them is legitimate. But that isn’t the point. The point is that they are trying to take away someone else’s ability to choose what they want to read, and you can’t do that.”

In concert with the ALA, the Comic Book Legal Defense Fund (CBLDF) has published a free Banned Books Week Handbook focusing on the unique vulnerability of their favorite kind of book to  well-meaning but misinformed censors, in which they explain why comics and graphic novels are popular targets:

Why are comics banned?

Comics face challenges for the same reasons as any other books. Reasons books are frequently challenged include “adult content, “language,” “sex / nudity,” or “inappropriate for age group.” Comics are uniquely vulnerable to challenges because of the medium’s visual nature and because comics still carry the stigma of low-value speech. Some challenges are brought against comics because a single page or panel can be taken out of context, while others come under attack because of the mistaken notion that all comics are for children.

Your RRHS Library carries copies of many banned books, including Bone, Fun House, Blankets, The Killing Joke and other challenged graphic novels, including more from this list  from Entertainment Weekly of all-time comic book greats which have been subject to challenges. Come on in and read something dangerous.

For more about Banned Books Week, check out our post from Banned Books Week 2013, the 2013-2014 Books Banned or Challenged report, and these banned graphic novel discussion planners from CBLDF.

- October 31, 2018
The world of Drew Edwards' Halloween Man is, despite it supernatural flavor and horror pedigree, very down-to-earth. Opponents are dispatched with physical weapons, often of the melee variety, and generally have at least one bloody bite taken out of them by the hero. When greater powers do appear, they may be mysterious, but they're not exactly revered . The mystic who made Solomon Hitch into the titular hero, Morlack, is such a greater power, as well as a lush, a slob, and an all-around horse's rear. While Solomon and Lucy do the heavy lifting of dispatching Spring Heeled Jack, whose powers flow from a source similar to Halloween Man’s, the engrossing part of this Samhain story is the embroidering of the universe in which it’s set. While it’s a small window into Morlak’s lengthy past, it helps round out the enigmatic and frustrating character by  adding a few data points about just where his line between right and wrong is drawn, as well as a better idea where his moral c
Read more

- October 14, 2018
When I resolved to rationalize and expand my bicycle stable, I realized that my trusty, elegant commuter and reliable little folding bike would have to go. Ivy Mike was a lightly modified 2011 Novara Fusion that met all my on-road needs in style. However, when he was in the shop, or I needed to be flexible with my transportation plans, it was Nightbeat, a 2014 Novara FlyBy that took up the slack. In order to make room for a folding mountain bike and a folding road bike to explore the many trails in Austin and the many long organized rides around Austin respectively, the roles of my two steed would have to be met by a single new bike. What folds small for logistical flexibility, has multiple internal gears, disc brakes for wet stopping, fenders, and can mount panniers? I'd been pining after the Tern Verge S8i for some time, but at $2,100, it was simply more than I was willing to spend. I examined its features and picked what I could reasonably compromise on. Hydraulic discs were n
Read more

- May 30, 2018
The second entry in Drew Edwards’ series of Halloween Man specials, Halloween Man versus The Invisible Man melds emotional realism with the titillating and the fantastical to create a gritty and satisfying adventure. Solar City’s fetish community has been rocked by a series of unexplained deaths when the grand dame of the scene, Claudette, comes to visit her old frenemy Lucy Chaplin, or more precisely, Lucy’s beau, Solomon Hitch. Our hero is reluctant to engage in this sort of heroism; while he’s commonly called upon to thwart the ghastly and creepy, the problem is a mystery, and he’s no detective. While comic book heroes often express token reluctance in order to build suspense, it can usually be chalked up to a gruff misanthropic streak or false humility; in this case, Solomon is genuinely out of his depth and has good reason to defer, only taking the case out of a sense of solidarity with a subculture that is marginalized and sensationalized by the media in the same way he is. The
Read more