2008 State of the Head Address

- August 15, 2008
Madam Speaker, Mister Vice President, members of Congress, distinguished guests, and fellow cephalids: It had been a year since my last MRI, and in the strange way of memory, the noisiness of the tube had become exaggerated in my mind. This time, I almost managed to snooze through it, the rhythmic buzzing and knocking and whirring lulling me into drowsiness. But, then, I can sleep almost anywhere, especially when I'm bereft of anything to hold my attention.

A week later, this past Monday, m'lady and I met with Dr Stovall to compare and contrast the new with the old. It seems that in the intervening year, my meningiomic mind mite has been busy. Although I've experienced no change in symptoms (yay, carbamzapine!), I'm carrying around even more non-brain material in my head. It's now approaching a size that raises concern, having grown along all axes. It would seem that now is the time to act, or at least, to plan.

The preferred treatment is surgical removal. While it may seem that having open-brain surgery seems a touch extreme as a first choice, the high probability of a positive outcome seems to merit an aggressive approach. Meningiomas, the literature tells me, tend not to attach themselves to the brain, but rather their source tissue, the meninges.

As you can see, that leaves it a few layers above the actual cortex, although, since it takes up space, and none of the tissues below are what you'd call "rigid" compared with the skull, it exerts pressure on the brain. They are, however, ugly bastards: 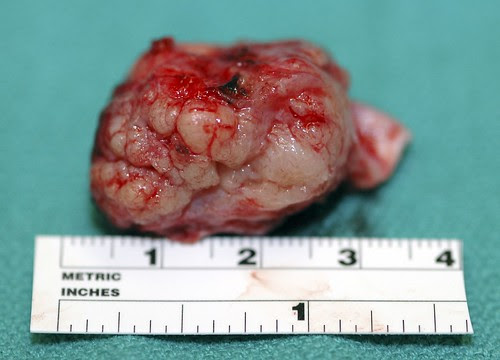 Naturally, I find this development is terrifying nonetheless. Lumpy and problematic though it is, I fancy my head, and in fact all my constituent body parts, to be as incision-free as possible. Of course, I equally wish them to be free of dangerous, ever-expanding blobs of doom. So, you can see my dilemma.

Where there is a first choice, though, there is often a second. In this case, the second-line treatment option is radiation. This path would grant me superhuman powers, perhaps permitting me to expel the bugger by force of will alone. Additionally, it will fracture the DNA in the tumor cells, killing them when they attempt to divide. Since it grows at a fairly leisurely pace, divisions clearly don't happen all the time; therefore, it would take a while before it dies off completely. Of course, it would still be pressing on the parts it presses on now, and may still resume expansion later. There's also some very, very small chance that it might give rise to other abnormal cellular behavior, likely not the sort that would require great responsibility on my part.

Next week, I'll be subject to another MRI to see where my brain's oxygen concentrates, better defining the edges of the tumor. That information will be added to the stack of facts and probabilities that I already have, and over the course of the next several weeks, work its way through several stages of Bloom's Taxonomy en route to a decision. Watch this space!
narrative

- October 31, 2018
The world of Drew Edwards' Halloween Man is, despite it supernatural flavor and horror pedigree, very down-to-earth. Opponents are dispatched with physical weapons, often of the melee variety, and generally have at least one bloody bite taken out of them by the hero. When greater powers do appear, they may be mysterious, but they're not exactly revered. The mystic who made Solomon Hitch into the titular hero, Morlack, is such a greater power, as well as a lush, a slob, and an all-around horse's rear.
While Solomon and Lucy do the heavy lifting of dispatching Spring Heeled Jack, whose powers flow from a source similar to Halloween Man’s, the engrossing part of this Samhain story is the embroidering of the universe in which it’s set. While it’s a small window into Morlak’s lengthy past, it helps round out the enigmatic and frustrating character by  adding a few data points about just where his line between right and wrong is drawn, as well as a better idea where his moral co…
Read more

- October 14, 2018
When I resolved to rationalize and expand my bicycle stable, I realized that my trusty, elegant commuter and reliable little folding bike would have to go. Ivy Mike was a lightly modified 2011 Novara Fusion that met all my on-road needs in style. However, when he was in the shop, or I needed to be flexible with my transportation plans, it was Nightbeat, a 2014 Novara FlyBy that took up the slack. In order to make room for a folding mountain bike and a folding road bike to explore the many trails in Austin and the many long organized rides around Austin respectively, the roles of my two steed would have to be met by a single new bike.
What folds small for logistical flexibility, has multiple internal gears, disc brakes for wet stopping, fenders, and can mount panniers? I'd been pining after the Tern Verge S8i for some time, but at $2,100, it was simply more than I was willing to spend. I examined its features and picked what I could reasonably compromise on. Hydraulic discs were n…
Read more

- May 30, 2018
The second entry in Drew Edwards’ series of Halloween Man specials, Halloween Man versus The Invisible Man melds emotional realism with the titillating and the fantastical to create a gritty and satisfying adventure. Solar City’s fetish community has been rocked by a series of unexplained deaths when the grand dame of the scene, Claudette, comes to visit her old frenemy Lucy Chaplin, or more precisely, Lucy’s beau, Solomon Hitch. Our hero is reluctant to engage in this sort of heroism; while he’s commonly called upon to thwart the ghastly and creepy, the problem is a mystery, and he’s no detective. While comic book heroes often express token reluctance in order to build suspense, it can usually be chalked up to a gruff misanthropic streak or false humility; in this case, Solomon is genuinely out of his depth and has good reason to defer, only taking the case out of a sense of solidarity with a subculture that is marginalized and sensationalized by the media in the same way he is.
The t…
Read more